Miss Universe 2017 will be the 66th edition of the Miss Universe pageant, which is slated to take place on November 26, 2017 at The AXIS, Las Vegas, Nevada, United States. During the conclusion of the pageant, Iris Mittenaere of France will crown her successor at the end of the event.

Miss Universe 2017 is all set to conclude within two days and the world is waiting with baited breath as to who will walk home with the coveted title of Miss Universe. This year more than 92 countries are vying to be the ambassador of “Confidently Beautiful”.  Like every year, The Kaleidoscope of Pageantry is here with its sixteen favourites for the Miss Universe crown, so without delaying it much, let’s get started with the concluding review. 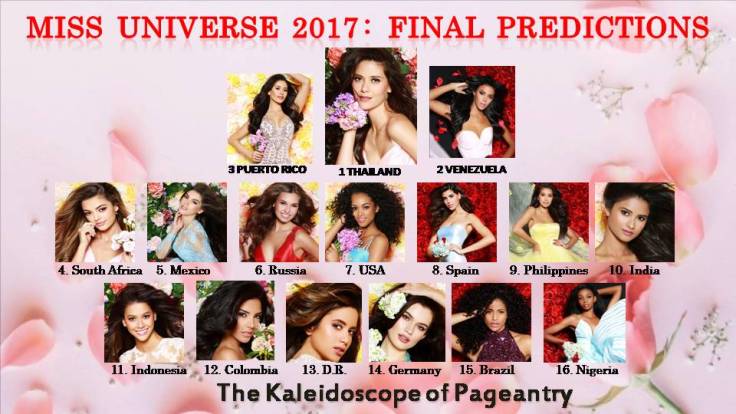 Heading the hotpicks is Thailand. Maria Poonlertlarp can be the next Asian to make huge splash in one of the biggest pageants in the world. It has been 29 years since Thailand won its Miss Universe crown, with a lady like Maria, who works for the cause of spreading awareness regarding teen age pregnancies, Thailand has not just sent a beautiful face but also a substantial personality with a strong story backing her for the Miss Universe crown. She smiles like dream and has good stage presence.

Next up we have Venezuela. Keysi Sayago totally changed the opinions of pageant fans and critics as she arrived Las Vegas for the Miss Universe competition. The lady who was by now acknowledged as a ‘Plain Jane’ proved what it means to wear the sash of Venezuela during the preliminary competition. If she aces the interview round, no one can stop her from coming this close to Miss Universe crown.

Thereafter we have the stunning and exotic beauty from Puerto Rico. The country which holds the record of winning five Miss Universe crown can be certain of its another feat of achievement by sending a performer like Danna Hernández. She has proved out to be one of the perfect candidates for Miss Universe title with her wonderful preliminary performance.

On number four we have the very gorgeous beauty queen from South Africa. Demi Leigh Neil Peters started off well at the pageant, but her styling and gown was a total turn off in the preliminary. Despite of that, we must not forget that this lady is a performer and is also eloquent enough to prove her mettle in the interview. She has it all to lock her spot in Top 5.

Taking the fifth spot is Mexico. Denisse Franco not just look like a queen through her facial charm but is also a star when we see her performing on stage. By giving an impeccable performance in both swimsuit and evening gown in the preliminary competition, Mexico has justified all the hype around her, proving that she has all to finish in the Top 5.

Dazzling on the sixth place is Russia. Ksenia Alexandrova has been the talk of the pageant town for all the right reasons. She has the spark to stand out in crowd and she knows how to turn heads when she is off or on camera.

USA is next up in our hotpicks. Kára McCullough is not just a pretty face but also possess a beautiful mind. As a scientist, Kara not just looks wise when facing interviews but also glamorous and vivacious as she walks the runway.

Following up is Spain. The countries which have given memorable runner ups like Patricia Rodriguez, is back with a bang. Sofía del Prado gave an impressive performance in prelims and with a gorgeous face like that she can go really far.

Thereafter we have, Philippines. Rachel Peters has managed to maintain the dignity of Filipino sash at Miss Universe. Not only has she remarkably handled the press but has emerged out to be one of the very confident delegates with the poise and grace she reflects on stage.

Following up is India. Don’t underestimate this beauty for she is here to make her nation proud. Shraddha Shashidhar is not any other clichéd woman from India, but has the charisma to stand up boldly for herself. Not withered by the pressure from her countrymen, she is just living her moment and that is why she will go a long way.

Bunga Jelitha from Indonesia is next in out hotpicks. This photogenic beauty knows how to work her stuff on runway. Having one of the best rampwalk skills, Indonesia justly seeks spotlight in the finale of Miss Universe.

Following up are Colombia, Dominican Republic, Germany, Brazil and Nigeria. Colombia has been placing in Top 5 since last three years, however this year it seems difficult for Laura González to crack the final five. Although Laura has been a good delegate from her nation, she lacks the ‘it’ factor to make it far. Carmen Muñoz showed tremendous energy to make it to semi-finals, Dominican Republic is all set to be called on stage this finale night. The gorgeous face and stunningly commendable performance by Sophia Koch can bring Germany on the map of Miss Universe. Nigeria might surprise you here, but trust me she has given her all in the prelims, she is going to shine.

Review: The Worst and Best Gowns of Miss Universe 2017